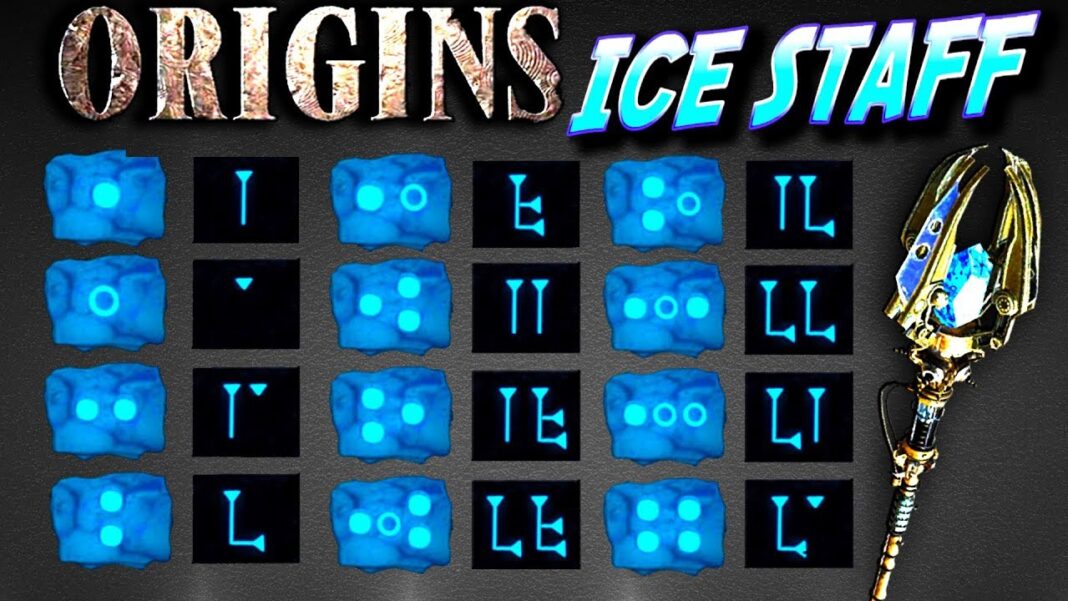 Detailed instructions on how to upgrade the Ice Staff in Origins are included in this tutorial, as well as a section on collecting the original blue discs, gramophone and the base Ice Staff itself. To make things as simple as possible, as with all of my other guides, I’ve included screenshots, maps, and other puzzle codes.

There is no better time to explore the Ice Staff upgrading procedure now that the remastered version of Origins is now available in Zombies Chronicles and that many of you are playing the backwards compatible Black Ops 2 version on Xbox One.

Zombies are instantly frozen and then shattered by the Ice Staff, making it one of the most aesthetically stunning weapons available in Origins. The default version, on the other hand, includes a flaw that makes it difficult to escape from a horde of frozen adversaries.

However, because to its charged strike (or super attack, if you prefer), the enhanced Ice Staff is perhaps the best staff in the game because it suckers in neighbouring zombies. This attack is a great high-round ally and a great support weapon for your camp site.

When it comes to the Ice Staff, let’s begin with the basics:

A guide to obtaining the Ice Staff

The gramophone staff, like all the others in Origins, requires three pieces: a coloured disc, a black disc, and the gramophone itself. It is necessary to utilise the phonograph in order to unlock the BLUE portal in the Ice Staff (Ice Portal).

In which Room Is the Disc?

Generator 2 is always right next to the blue disc. There is a shelf close to the back door where you can keep your weapons.

There are no specified placements for the Ice Staff pieces, but there are precise conditions for their use. The rubble piled on the floor must be dug out when it is snowing. Typically, this means opening every portion of the map and excavating every dig site until you get all three.

Open the lower level of the excavation site with the Gramophone and the Black Disc. One of three places is where you’ll always find it:

On the other side of the excavation site, near the church’s entrance, is a box.

At all times the Gramophone is located one floor lower in the core excavation site (dig site). The secret sub-level with the Staff statues can be accessed by placing the Gramophone on the table. Make sure to always open the lowest area of your excavation site and then immediately grab your record player to avoid having to return to the site later on.

Go to Generator 6 once you have the pieces, disc, and gramophone (back of the church). The blue portal will appear as soon as you descend the tunnel and place your gramophone on the table at the bottom. Rebuild the blue portal to escape the strange place after obtaining the crystal from the blue pedestal.

Build your staff from a statue at a lower level at your centre excavation site, then return there.

The Ways to Improve

Start by figuring out how to use the Ice Staff.

Go to the insane place through the blue portal with the Ice Staff equipped. Take notice of the blue markings on the slabs immediately. On the wall, you’ll notice a blue emblem.

The Ice Staff can be used to shoot the correct ceiling slab that matches to the wall symbol. This should be done a number of times.

Codes for Solving the Mystical Mysteries:

The Gravestones can be shot.

Return to the real world and leave this insane place behind. Use the Ice Staff to destroy three gravestones, and then switch to a different weapon.

It is located next to the Soul Box mud pool on Generator 6’s east side of the map.

Generator 6 Jug is right next to a mud pit with a Soul Box. Outside of the map’s border, Gravestone is facing away from Jug.

Out back of the Generator 2 building, in the muck. A gravestone may be found next the Robots arm, which can be found just beyond the map’s borders.

Take a look at the circular rings hovering above the Staff sculptures on the lowest level of the excavation site. On the sides of each ring are germs in four different colours. Each ring must be rotated to align all of the BLUE gems.

You can do this by pulling the levers that are positioned on wooden scaffolding platforms and next to the walkway in the lower level of the excavation site. They resemble power switches.

As soon as all the rings are aligned, use an Ice Staff to shoot a blue ball that’s sitting at the bottom of the rings upwards and through them.

Once you’ve returned to the insane location, simply use the BLUE portal to exit. Back at the pedestal where you first found the gem, place the Ice Staff. The staff can be charged by killing 2-30 zombies in the immediate area.

The improved version is now ready for you to use! Just take up the staff and enjoy it!